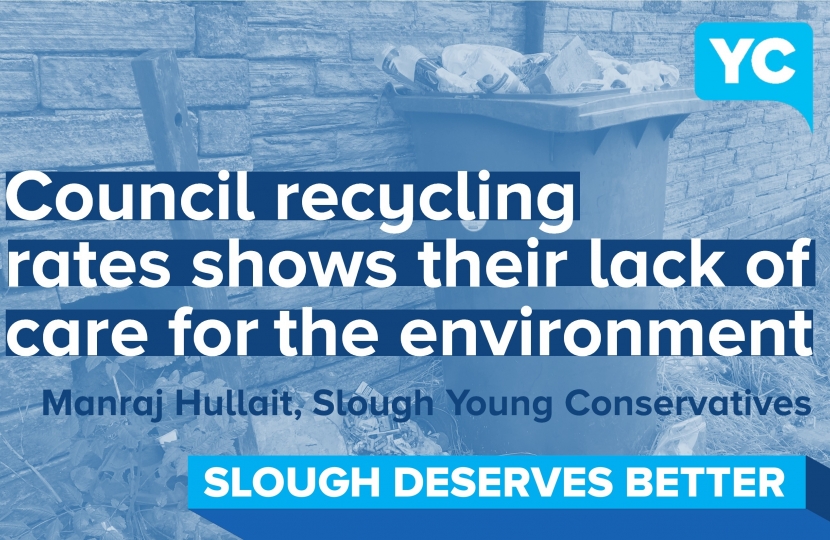 This week I will be asking the Slough Borough Council cabinet member for the environment, Councillor Rob Anderson, why Slough’s performance on recycling rates is so awful compared to the Berkshire and National rates.

Despite a national and Berkshire upward trend of increasing waste recycling rates, the performance of Slough Borough Council is going backwards (see Table 1 below). This highlights how poorly waste services has been managed by this council over many years.

To meet the waste recycling target of 50% by 2020 as set out in the Waste (England and Wales) Regulations 2011, the council would have to increase its rates by 90% in the space of less than 3 years. Over the last 3 years the largest increase by any council was Stroud District Council, who increased their rate from 30.4% in 2014-15 to 45.5% in 2016-17, and even then, only 9 councils managed a rate increase of more than 20% (see Table 2 below). Given this evidence, it makes it very difficult to believe that Slough Borough Council will ever meet the target.

The news gets worse for the council, as the target is set to be increased by the government in the publication of their new UK waste strategy later this year – to 55% by 2025, 60% by 2030 and 65% by 2035 (source – www.letsrecycle.com/news/latest-news/eu-ambassadors-back-waste-framework-directive-revisions/).

Back in July 2015 the council cabinet committed itself to strive to become a zero landfill council, and set out plans to encourage residents to reduce, reuse and recycle their waste whether at home or around the town, support volunteers for community clean up campaigns and support composting of food and garden waste at home (source - http://83.138.142.253/moderngov/documents/s38340/Report.pdf) but despite this rates have declined. In reflection of its poor recycling rates, its failing strategy has led to its waste to landfill rate being ranked 60th out of 363 councils UK wide in 2016-17 (see Table 3 below). It was only 2013 when the council boasted that it had reduced its waste to landfill rate to just 0.7% (source - http://www.sloughobserver.co.uk/news/13436656.Rubbish_sent_to_landfill_from_Slough_at_the_lowest_rate_ever/) so this is yet another household waste measure going in the wrong direction.

This council has had years to plan and deliver an increase in recycling. It is what residents want it to do and what the environment needs. It is time now for the council to come forward with a proper waste strategy outlining clear plans and targets showing how it intends to reduce landfill waste, increase recycling rates and meet the targets that UK government has set, and it has set itself. Right now, it is very unclear to residents how the council will avoid a growing bill for landfill tax and fines for poor recycling rates.